When Words Fail - Say It With Gift Baskets

You want to show your friends and loved ones how much you care, but sometimes it is hard to find the right words.

A gift basket is the perfect way to turn the words you want to say into a tangible present that the people you care about will love, and cherish - and most importantly - use.

That is why a gift basket is such a wonderful choice for any occasion. No matter what you are celebrating or who you are honoring, we have a gift basket perfect for the occasion. 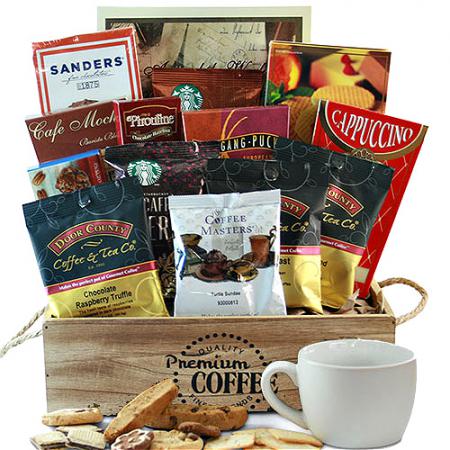 Roll over image to zoom

$145.00 in stock
An amazing coffee gift basket that is jam-packed with assorted gourmet coffees from around the world!

Upgrade someone’s morning ritual by sending an amazing coffee gift basket that is jam packed with assorted gourmet coffees from around the world! This gift will surely delight and deviate from the average cup of Joe.

Health Benefits of Coffee Consumption Coffee lovers will tell you already that there are numerous benefits to practically inhaling the drink each morning. Some people even go so far as to consume the beverage all day long in some form or another. Some like it hot, some like it cold, and some like it in or with desserts such as ice cream. To these people, it may not be surprising to find out that coffee might have some health benefits, despite the negative reputation it has for the unhealthy side effects of caffeine consumption. However, there may very well, indeed be some excellent benefits to coffee consumption. These are three purported benefits of coffee consumption.

Coffee As An Anti-Depressant Folgers does claim that the best part of waking up is, well, their coffee in your cup. But, some research suggests that any coffee in your cup may be a key to fighting depression. According to Prevention magazine, those that drink four or more cups of coffee a day are less likely to display symptoms of depression. And, since the same benefit does not extend to other caffeinated beverages, researchers suggest it is due to the antioxidants found in the drink, not the caffeine. Perhaps Joe should be considered a valued friend, after all.

Coffee for Weight Loss It may seem counter-intuitive to drink a caffeinated beverage and expect weight loss, but minus all the extra creams and sugars, coffee can be useful for weight loss efforts. At least, that is what Dr. Oz has claimed on one of his shows. A few other researchers make this claim as well, but still, others caution that there is no definitive evidence to back up the claim entirely. Instead, it is green coffee beans that are thought to assist with weight loss. They supposedly do so because they are unroasted beans, which still contain a chemical compound called chlorogenic acid. This compound is lost when the beans are heated and roasted, and it is this chemical that is said to aid with weight loss.

Coffee to Avoid Liver Failure As unlikely as it may seem, some studies suggest that coffee may reduce the risk of specific liver problems. The Mayo Clinic offered study results claiming that those that consume coffee regularly, a cup a day or more, may have a lower risk of developing primary sclerosing cholangitis, or PSC, which is an autoimmune disease that causes liver damage. And alcohol consumers might also like to know that it is believed that those who consume coffee daily might be less at risk for alcoholic cirrhosis of the liver.